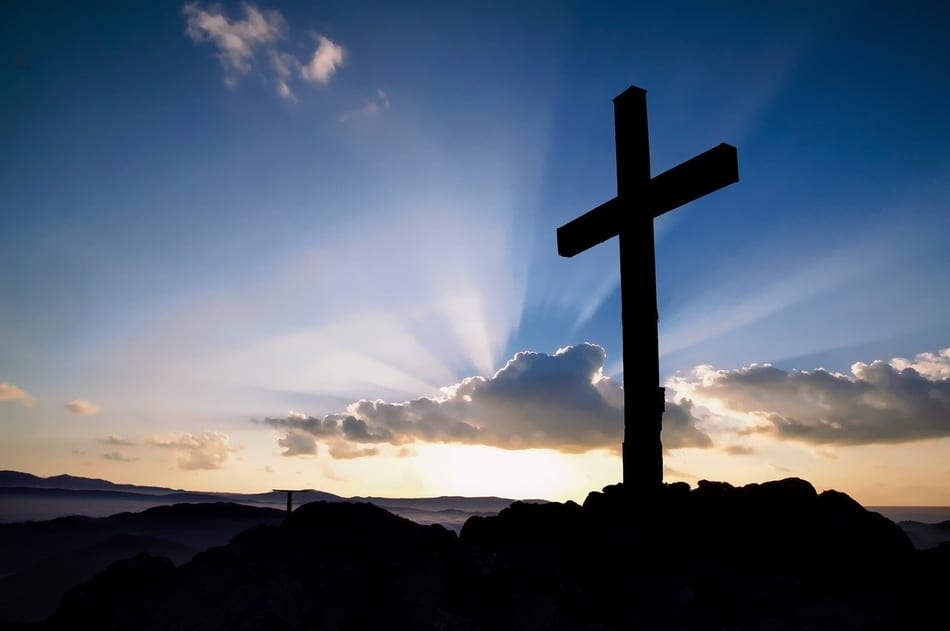 What does it mean when God raises up a standard? The Bible tells us in Isaiah 59 that when the enemy comes in like a flood, the Spirit of the Lord will lift up a standard against him.

Isaiah 59:19 was a prophecy of the coming Redeemer, Jesus Christ, and His work on the cross that would be a standard against the enemy.

So shall they fear the name of the Lord from the west, and his glory from the rising of the sun. When the enemy shall come in like a flood, the Spirit of the Lord shall lift up a standard against him. Isaiah 59:19

When God raises up a standard, it means that His work at the cross has created a standard against the enemy that cannot be overcome. Jesus’s crucifixion and resurrection has provided salvation for humanity and defeated the enemy.

As we look at the entirety of Isaiah 59, we see how it is discussing the enemy ruling over the people, causing them to completely turn from the Lord and go their own way.

The devil had come into the earth and caused all people to yield to him and go astray from the love and care of the Lord. The people had turned to a life of sin and destruction which separated them from the God who made them.

But your iniquities have separated between you and your God, and your sins have hid his face from you, that he will not hear. Isaiah 59:2

None calleth for justice, nor any pleadeth for truth: they trust in vanity, and speak lies; they conceive mischief, and bring forth iniquity. Isaiah 59:4

Their feet run to evil, and they make haste to shed innocent blood: their thoughts are thoughts of iniquity; wasting and destruction are in their paths. Isaiah 59:7

Salvation was Prophesied in the Old Testament

Verses 16-21 of Isaiah 59 are prophesying of the coming Messiah and how He would bring salvation to humanity.

Authority on this earth had been given to man (see Genesis 1:26), but no man could right the wrong that the enemy had brought into the earth, because all had been corrupted by sin.

This is why Jesus had to become a man. The Lord in His infinite wisdom fixed the problem Himself by becoming a man and bearing our punishment so we could be reconciled to God.

Jesus was the ultimate solution for mankind. His work was completely victorious over the enemy.

Has the Devil Been Defeated? The devil has been completely defeated by Jesus Christ.

When a person appropriates the work of the cross in any situation, the enemy is completely defenseless against them.

But if you don’t understand what actually happened at the cross, you won’t be able to apply it to your life.

I remember as a child always hearing about Jesus dying on the cross, but it wasn’t until I was an adult that I began to understand what that actually meant.

Jesus was the final sin offering that has completely cleansed us and defeated the devil.

The entirety of the curse found in Deuteronomy 28 (which includes everything bad you could think of) can only come upon sinners, those disobedient to the law of God. Without salvation, that includes every single one of us!

At the cross, Jesus has completely removed your sin and made you righteous- the very righteousness of God.

None of these punishments for sin found in Deuteronomy 28 can be brought on a righteous person.

Are you seeing it? If you have been made a new creation, created in righteousness and true holiness (Ephesians 4:24), you can never again be punished for sin. The curse of the law can not legally come upon you!

Jesus’s crucifixion and resurrection has wiped out the use of the Old Testament law for us. The requirements against us have been done away with.

having wiped out the handwriting of requirements that was against us, which was contrary to us. And He has taken it out of the way, having nailed it to the cross. Colossians 2:14

The devil’s weapon against humanity was the Old Testament law. We could never in our own strength meet the requirements of the law. Therefore, the devil could condemn us and bring about death and curses into our life. But when Jesus bore our sin on the cross, He also ended the use of the law for us to try and obtain righteousness.

For Christ is the end of the law for righteousness to everyone who believes. Romans 10:4

When you realize what Jesus has done, you can stop trying to obtain righteousness on your own and receive the righteousness that comes through faith in Jesus.

When you know that you are the very righteousness of God, you will never again allow punishment for sin to come upon you. The devil has been completely defeated.

Authority Over the Devil is Given to Believers

Through the crucifixion and resurrection, Jesus not only conquered Satan and his forces but He spoiled them. He stripped them of all their power and authority over mankind. The devil no longer has authority over you!

Having disarmed principalities and powers, He made a public spectacle of them, triumphing over them in it. Colossians 2:15

In this verse, Paul was likening what Jesus did to the devil to what the Romans called “a triumphant procession”.  The Romans would take a conquered king or general and strip him naked, tie him to a horse or chariot, cut off his big toes and thumbs, and have a victory parade. This was to show all the Roman citizens that the one who had been a threat would never cause them any more trouble.

The devil can no longer cause you any trouble unless you let him! Jesus has completely defeated him and given you authority to enforce that victory here on the earth. If you are still experiencing trouble from the devil, it is because you are not using the authority given to you to resist him!

Therefore submit to God. Resist the devil and he will flee from you. James 4:7

Did you catch that? The devil will flee from YOU! He will run scared when you stand up and enforce the victory that Jesus has obtained for you. You are in Christ. You have been made completely righteous. Sin and the punishments for sin can never be imputed to you.

Jesus said that nothing has the right to harm you. He has given you His authority to use on this earth.

Behold, I give you the authority to trample on serpents and scorpions, and over all the power of the enemy, and nothing shall by any means hurt you. Luke 10:19

Jesus’s authority is above every name that can be named. There is absolutely nothing on earth, under earth, or above earth that is higher than the name of Jesus. Everything submits to Him.

Therefore God also has highly exalted Him and given Him the name which is above every name, that at the name of Jesus every knee should bow, of those in heaven, and of those on earth, and of those under the earth, and that every tongue should confess that Jesus Christ is Lord, to the glory of God the Father. Philippians 2:9-11

and you are complete in Him, who is the head of all principality and power. Colossians 2:10

When you understand the fact that the devil is completely defeated and that you have authority over him, nothing the enemy brings will prevail against you.

To help renew your mind to the authority you have in Christ, I have put together a list of affirmations from the Word of God about your authority. Read them out loud until they get into your heart and you see yourself the way God does- full of power and authority on this earth!

No Weapon Formed Against You Shall Prosper

Jesus’s work on the cross was completely successful.

Jesus is the standard that the Spirit of the Lord has raised up. Nothing has or ever will be able to override what Jesus has done. He has secured our salvation and righteousness eternally.

Now that you have been created eternally righteous, no weapon formed against you will ever be able to prosper.

No weapon formed against you shall prosper, and every tongue which rises against you in judgment you shall condemn. This is the heritage of the servants of the Lord, and their righteousness is from Me,” Says the Lord. Isaiah 54:17

Words that are spoken against you are weapons. Thoughts of condemnation brought to you by the devil should be cast down. Every tongue that rises against you can be condemned because your righteousness is from God.

This means that when a thought comes to your mind that says “you are horrible”, you can condemn those words because your righteousness is not based on your actions. Your righteousness is from God and can never be changed. God has raised a standard against the enemy in your life.

For more about how to resist condemnation, read What Does the Bible Say About Condemnation?